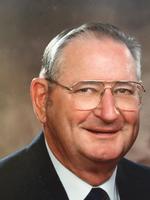 Dave Wisniewski, 86, of Muscatine, passed away on Thursday, December 24, 2020, at Lutheran Homes.

In light of COVID-19 protocols, there will not be a viewing or Funeral Mass at this time. The family plans to have a celebration of our Dad’s life at Muscatine at a date and local place to be determined in 2021. Burial at a later date will be at the family plot in Springfield Township Cemetery, Toledo, Ohio. Dave was an active parishioner of Ss. Mary and Mathias, serving many years as an usher.

Dave/Dad/Grandpa (GP)/Great Grandpa (GGP) was a Christmas Baby, born on December 25, 1933 in Toledo Ohio, the eldest son of Edward C. and Alice M. (Haupricht) Wisniewski. He was a graduate of Toledo’s DeVilbiss High School, lettering in basketball and graduated from the University of Toledo in 1956, with a B.S. in Civil Engineering. He was a letterman on the 1954 University of Toledo’s basketball team, who that year won their first conference championship and made their initial appearance at the NCAA Tournament. He served in the U.S. Army Corps of Engineers as a First Lieutenant.

Dave married Katrina (Schneider) on August 28, 1954 at OLPH Catholic Church in Toledo. After starting a family with the three children in Toledo, Dave and Katrina moved and made homes in Michigan, New Jersey (twice), Connecticut (twice) and Massachusetts, returning to Toledo several times in the interim. Dave and Katrina moved to Muscatine in 1980 where they remained until her death in 2014 and Dave’s passing away.

Dave is remembered for several different aspects of his professional life. He designed several family houses, including the one in Muscatine. He obtained his Professional Engineer license from the State of Ohio and had two distinguished careers in the private sector; one with Owens-Illinois (O-I) and later with Thatcher Tubes/Courtaulds. With O-I, he held various engineering and field positions, one of the last being Plant Manager, building and operating a glass bottling plant in Mansfield, Massachusetts. He joined Thatcher Plastic Packaging in 1979 as General Manager, relocating to Muscatine. After retiring from the private sector in 1993, he was successful in his first run for public office, elected to the Muscatine Board of Supervisors serving from 1994 to 1998.

On the personal side, Dave was involved in several voluntary causes in Muscatine, especially supporting Katrina’s volunteer activities. He served as a member of the United Way - Muscatine Executive Board. He is remembered as a loving husband, father, grandfather and great-grand parent. Family life included numerous projects to make a new house a home, making sure the outside bell was up as soon as practical. There were numerous long and memorable family driving vacations to see relatives. Later, as empty nesters, Dave and Katrina, then later just Dad, would set out on car trips to visit the three kids and grandkids in the East Coast in the spring and fall, and Houston in the winter. Each trip involved some type of ‘Dad’ project. He enjoyed basketball and volleyball in his younger adult years, and loved basketball enough to form a league in Connecticut for the boys in the town. In Muscatine, Dad’s biggest hobbies were playing golf and bridge, gardening and watching sports. He was especially proud of his double eagle at Geneva Country Club.

He was preceded in death by his parents, Alice and Edward Wisniewski, his brother Charles, and his loving wife Katrina.
In lieu of flowers, memorials may be sent to the Muscatine Center for Social Action (MCSA) or to Ss. Mary and Mathias Catholic Church.

The family requests no flowers. Please share your love, support and memories with David’s family on his Memorial Tribute site at www.NicholsBewley.com.

Nichols Bewley Funeral and Cremation Services is caring for David’s family and arrangements.