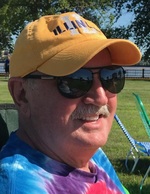 Private services will be held. Interment with military honors, will be at the Rock Island National Cemetery. Nichols Bewley Funeral and Cremation Services is caring for Denny's family and arrangements.

He was a veteran of the United States Army having served from 1970 to 1971. He received the Soldiers Medal for Heroism and The Bronze Star Medal for Meritorious Achievement in Ground Operations Against Hostile Forces.

He had worked as a security guard and was a DJ.

He was preceded in death by his parents and three sisters, Marsha Kuntzi, Mary Gould and Carol Amfahr.

Please share your love, memories and support with Denny's family on his memorial tribute page at www.NicholsBewley.com.