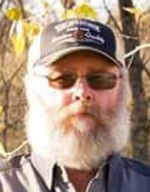 Services will be announced at a later date. Bewley Funeral Home and Cremation Services, Aledo, is caring for Michael’s family and arrangements.

Online condolences may be left for Michael’s family at www.bewleyfuneralhome.com.

He was a truck driver for General Grind and Machine.

He enjoyed riding his Harley, watching sports, especially the Steelers and Cubs, and drinking PBR while listening to music. He also enjoyed spending time with his grandkids.

He was preceded in death by his mother, two brothers, Pat Dale and Tom Dale and one sister, Linda Nelson.