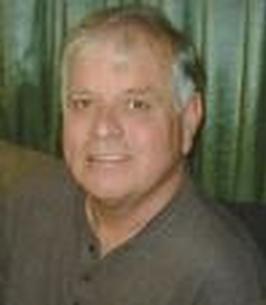 Print
Ralph L. Hill, Jr., 66, of Aledo, passed away Saturday, September 24, 2016, at the University of Iowa Hospitals and Clinics in Iowa City.

Services will be 2:00 p.m. Wednesday, September 28, at Bewley Funeral Home and Cremation Services in Aledo. Burial will be in Aledo Cemetery.

Memorials may be made to the Make-A-Wish Foundation or a charity of your choice. Online condolences may be left for the family at www.bewleyfuneralhome.com.

He began working for his father at the Mercer Ready Mix Plant at the age of 16 years. He retired from Hahn Ready Mix as Plant manager after 50 years of service. He also tended bar at Town and Country Lanes for 35 years.

Ralph enjoyed spending time with friends and family, attending his grandchildren’s sporting events and activities, traveling with his wife and friends. He was a lifelong Dodgers fan and liked to work crossword puzzles.

Those left to honor and cherish his memory include his wife, Barbara; daughters, Wendy (Clint) Bigham of Aledo and Linda (Sean) McDonnell of Moline; five grandchildren, Cal, Emi, and Ben Bigham and Gage and Brook Lager; sisters, Sandra Matthews, Rita Haizlip and Darla (Bill) Brown, all of Aledo; mother-in-law, Ruth Fowler of Viola, IL; several brother-in-laws and sister-in-laws, many special nieces and nephews and great nieces and great nephews.

He was preceded in death by his parents.

Ralph’s family wishes to extend a special thank you to Dr. Porubcin and his entire staff at Medical Arts Associates and Hahn Ready Mix.

To send flowers to the family of Ralph Hill, please visit our Heartfelt Sympathies Store.

We encourage you to share any memorable photos or stories about Ralph. All tributes placed on and purchased through this memorial website will remain on in perpetuity for future generations.

Provide comfort for the family of Ralph Hill by sending flowers.
Send Flowers

SS
So sorry he will be missed by many prayers for you all
sheila dillie / sheiladillie@yahoo.com - Monday November 30, -0001 via Condolence Message

SS
Barb and family sorry to hear of Ralph's passing. Remember him from High School and when you got married. May God be with you during this difficult time.
Sarah Speer / srhspeer@yahoo.com - Monday November 30, -0001 via Condolence Message

DK
Barb and family, we are so sorry for your loss. We were all pulling for Ralph, but he just couldn't make it. What a great story teller he was. I'm sure everyone in Heaven is enjoying his stories now.
Donald and Kathy Bell / kbell1@frontiernet.net - Monday November 30, -0001 via Condolence Message

KK
My thoughts and prayers are with you and your family, Barb. May your memories of his love and laughter bring you comfort. Godspeed Ralphie.
Kandi Harrison / kandiharrison1@gmail.com - Monday November 30, -0001 via Condolence Message

We were saddened to hear that Ralph had passed. Please accept our deepest sympathy and you are in our prayers.

CC
I am sorry for your lose I will miss this man he was a great person to talk to
chris riedl fellow hahn employee / criedl@machlink.com - Monday November 30, -0001 via Condolence Message

CB
So sorry to hear about your lose. I have some great memories of cribbage games around Ralph Sr. and Ruth's kitchen table. Deepest condolences to you all.
Christine (Miller) Glenney / bonesandchris@comcast.net - Monday November 30, -0001 via Condolence Message

DD
Barb&family so sorry to hear that Ralph had passed.You are all in my thoughts and prayers.May all your memories bring you comfort! Dianne & Dave Wilken
Dianne Wilken / davediannewilken@msn.com - Monday November 30, -0001 via Condolence Message

FF
Ralph was an ornery, tough, wise, and really fun guy. And an astute businessman. Prayers to you Barb, Wendy and the family. Ralph will be missed.
Frank Harlan / fharlan@blm.gov - Monday November 30, -0001 via Condolence Message
1 2 next page >>
Page 1 of 2
Share
×