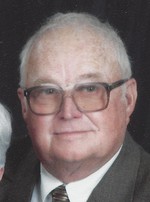 Services will be 10:30 AM Monday, June 4, at Bewley Funeral Home and Cremation Services, Aledo. Burial, with Military Honors, will be in the Aledo Cemetery.

Dick was born January 15, 1933, the son of Sydnie Elizabeth Edwards and Clayton Dale “Bill” Maynard. He was raised by his maternal grandmother, Selma Edwards. He graduated from Aledo High School in 1951 and attended Western Illinois University.

Dick married the love of his life, Jennievee O. Blackman, of Seaton, Illinois, on August 23, 1952, in El Montecito, California.

After serving in the military, he worked for Illinois Power. He served as Mercer County Sheriff from 1958 to 1962. In 1963, he went into business with the late Charles Ford Sr. and formed Ford & Maynard Real
Estate and Insurance Agency.

Dick invested much time into the Aledo downtown. He was instrumental in bringing numerous businesses to Mercer County. He owned and operated the Aledo Opera House, The Slammer/Great Escape, Aledo Hardware, as well as the Aledo Depot.

Dick was a devoted Democrat. He served as the Mercer County Democratic Chairman for 40 years. He was
a member of the Aledo United Methodist Church, Aledo Jaycees, Masonic Lodge No. 252, VFW Post No.1571 and the American Legion Post No. 121.

Those left to honor and cherish his memory are his loving and devoted wife, Jennie; his sons, Richard E. Jr. (Mary) Maynard of Aledo, Ronald (Patty) Maynard of Chandler, Arizona, Roger (Jackie) Maynard and Robert (Becky) Maynard all of Aledo; and one daughter, Jane (Bill) Stropes of Aledo. He also leaves behind eighteen grandchildren; and twenty-five great grandchildren.

Those meeting him in Heaven are his parents and grandparents; sister, Judy Haines; brothers, Tom Haines and Jimmy Maynard; and two great grandchildren, Erika Kate Maynard and Elijah Michael Maynard.

Memorials may be left to the Juvenile Diabetes Research Foundation, Erika Kate Hope Alliance, Aledo United Methodist Church or charity of choice. Online condolences may be left for Dick’s family at www. BewleyFuneralHome.com.