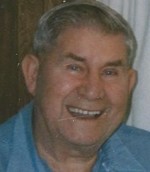 Memorials may be left to the Wayne King Memorial Fund or St. Jude’s Children Hospital. Online condolences may be left for Wayne’s family at www.bewleyfuneralhome.com.

He lived his whole life in Mercer County. He worked for the railroad for three years before leaving to join his brothers, Keith and Warren King, in farming, then farming with his nephew, Kenny King, until his retirement in 2005.

He loved farming and spending time with his family. He enjoyed playing Yahtzee with his wife and various card games with his great grandson, Brody.