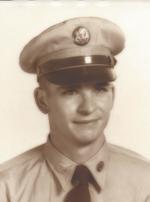 Funeral services will be 12:00 p.m. Wednesday., March. 14, at Bewley Funeral Home and Cremation Services, Aledo. Burial will be in the Rock Island Arsenal National Cemetery.

Visitation will be 10:00 a.m. to Noon Wednesday at the funeral home. Online condolences may be left at www.bewleyfuneralhome.com.

He was a United States Marine Corps veteran having served during the Korean Conflict. He retired as a welder and tool pre-setter with John Deere Harvester Works in East Moline, where he worked from 1963 to June 1, 1985, a member of UAW Local No. 865 in East Moline.

He was preceded in death by his parents, second wife and one brother, Thomas J. Hoffman.